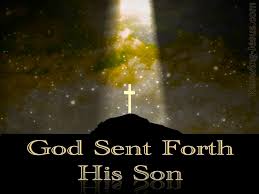 Galatians 4 Verse 4: But when the completion of the time came, God sent His Son”.

God sent His Son “ When the set time had fully come”

Let us look at how the Message Bible gives us insights about this part of The Scripture, from the following few verses:

“But when the time arrived that was set by God The Father, God sent His Son, born among us of a woman, born under the conditions of the law so that He might redeem those of us who have been kidnapped by the law. Thus we have been set free to experience our rightful heritage.”

Time had fully arrived, God sent His Son, strategically after Rome had built an extensive network of roads.On those roads The Apostle Paul {even as a prisoner] and many other apostles would carry the Good News of Jesus and His Kingdom to a substantial portion of the known world.

Mark Gospel is about ‘Such A Time As This” The Good News has come. Just as in Paul day the world system has build ways for the Gospel to be spread through out the world.

God has given us the same freedom, that Our Lord and Our Friend passed on to all who believe in Him, but it is a matter of choice.

The set time had fully come.

John 3 Verse 16 to 18 {Message Bible}:
This is how much God loved the world: He gave His Son One and Only Son. And this is why: so that no one need be destroyed; by believing in Him, ANYONE can have everlasting life. God didn’t go to all the the trouble of sending His Son merely to point an accusing finger, telling the world how bad it was. He came to help, to put the world right again. ANYONE who trust in Him is acquitted. Anyone who refuses to trust Him has long since been under the death sentence without knowing it. And why? Because of that person failure to believe in The One of a Kind Son of God when introduced to Him”.

The Set Time Is Fully Here, let us boldly embrace it and take it to the small corner of the world where ever we are.