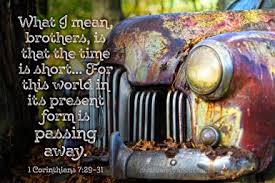 I’m convinced that fast food has ruined us. Yes it’s convenient, sure we don’t always feel like cooking, and yes it’s cheap. But I can’t help but feel like aside from the obvious lack of nutritional value, it’s conditioning us to want to get what we want right now.

I think back to fifteen years ago, the days of dial up internet. At the time, turning on the modem waiting for it to connect, the screeching and beeping as it tried to get a signal, the very slow loading of a page, was all just a part of connecting to the internet. Nowadays, if a website doesn’t load quickly, we get impatient and often times angry. Yet, all those years ago we were more than happy to be able to just log onto the internet.

Don’t even get me started on ebay! As handy and cheap as it is, I can’t even stand waiting five days for what I ordered to arrive in the mail. Especially when I can just walk into a shop, pay a little bit more and walk out.

And I hate that!

Everything that our God teaches, is against the now, now, now culture. Can you imagine if Daniel, after receiving his miracle almost instantly, had a hissy fit, whinged and moaned to God, then stopped praying, folded his arms and sulked in a corner? I’ll tell you what would have happened.

He wouldn’t have received his breakthrough. Plain and simple!

However in Daniels case he continued to pray and fast, despite his previous experience telling him he should have received it straight away. I feel that is so reflective of our generation. If we don’t receive what we have been asking for straight away we either think: God has answered No so we give up, or we sulk. After all, all His answers to us are yes and amen!

But do we really know the circumstances? In Daniels case after three weeks an angel appears to him and tells him, that he was sent the moment Daniel started praying, but was held up with issues caused by the king of Persia, and that Michael had to help him, so that he could come to see Daniel.

What about in our case? Ever think that there could be things that  we can’t see, hear, touch or feel, that could be hindering our prayer? Ever wonder how many prayers of ours could have been answers if we were willing to just keep push in and pray against the meddling of the enemy?

Now don’t get me wrong. I’m not pointing the finger and blaming anyone, all I’m doing is suggesting that maybe just maybe not everything comes when we want it, nor should it. But if we discipline ourselves to push in further with our prayer life. Not only will we begin to see more breakthrough, but our relationship will bound to improve, especially if we’re spending so much time with him.

In fact, in a totally unrelated point to close. How about we challenge ourselves to just spend more time with God. Not asking him or petitioning Him for anything, but just hanging out with Him. Get to know His voice, get to know His will, and soon enough you’ll know if something is standing in the way of your prayers!

So stay away from the fast food life. It’s bad for you!

The Kid aka  {Michael}